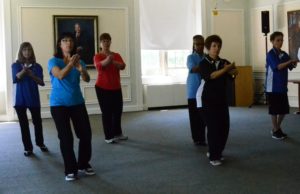 How Did It All Begin?

In 1980 Cathi Knauf graduated from Northern Michigan University with a Bachelor of Science in Nursing. After practicing as an RN for several years, she and her family began their trek throughout the Midwest because of her husband’s employment with IBM… Always interested in sports and exercise, she participated in different exercise programs from jogging to the “No Pain No Gain” aerobics of the time to Jazzercise to a sports physiotherapist run aerobics program (which was by far the best of all the programs up until that point). Nothing really fit nor did she ever feel “rested or energized” after exercising.

Her doctor recommended swimming, and her massage therapist and a DO who did spinal manipulations suggested alternative exercises such as Tai Chi. While classes were unavailable she found a few articles in magazines and on the Internet and began simple breathing exercises and Qigong movements.

A couple of years later she enrolled in her first Tai Chi class in Escanaba Michigan. Within three weeks of daily Tai Chi practice her massage therapist was amazed at how fast her muscles were releasing the tension during therapy. That summer she was able to take a class in Yang 37 Tai Chi in Central Park NYC and found out there was much more to learn.

She quickly picked up on Tai Chi through other teachers including classes in New York and Tucson AZ (Jeff Zauder, senior student WM C C Chen) and began to instruct her Tai Chi group on the Yang 108 Long Form. In 2006 she seized the opportunity to attend training classes with Tai Chi for Health Institute Dr. Paul Lam of Sydney, Australia.

She was nominated as a Senior trainer in 2011 and completed the Master Trainer requirements in January 2015 studying in Sydney Australia with Dr, Lam and his MT colleagues.

She is also certified in basic first aid and CPR. Cathi is a member of Tai Chi for Health Community and past-partner with the Exercise Alliance of Michigan Arthritis Foundation since 2006-2012. She was involved in Scouting for over 10 years as a Scout leader, Boy/Cub Scout Leader Trainer, Council Trainer and Board Member, and as a Cub Scout Camp Director.